Willy grew up in Possilpark in Glasgow, the seventh of nine children and the first in his family to go to University. His father, James Maley, was a member of the Communist Party and veteran of the Spanish Civil War. James was an avid reader who would borrow books from Gilmorehill Book Exchange and encourage his children to read every one, classic and contemporary, from Dickens and Scott to American pulp fiction. From Glasgow’s left-wing bookshops he brought the works of Marx and Lenin.

Willy left Possilpark Secondary in 1978 to take a job with Strathclyde Regional Council’s Roads Department. He went on to work for the Royal Bank of Scotland and Glasgow City Libraries. Through night classes he gained the qualifications to go to university, and started at the University of Strathclyde in 1981. His main aim was to study Librarianship so that he could go back into the library service as a qualified librarian. However, although he did well in his other subjects he failed the Librarianship course, which he found uninspiring. Willy focused instead on English Literature and Politics, graduating from Strathclyde in 1985 with First Class Honours with Distinction and winning the Meston Prize for top degree result.

A PhD at Cambridge followed, on ‘Edmund Spenser and Cultural Identity in Early Modern Ireland’ and in 1989 Willy returned to Glasgow. Work was scarce and periods of intermittent unemployment followed. It’s not uncommon for students who finish their PhD to spend a few years in the wilderness and Willy was no exception. During this time he worked as an adult literacy coordinator, did some freelance journalism, tutored at the University of Strathclyde and became writer-in-residence in Barlinnie Special Unit. He was also writing plays: between 1989 and 1995 Willy had eight plays performed at Glasgow’s Mayfest and at the Edinburgh Fringe, as well as West Yorkshire Playhouse, the Lemon Tree in Aberdeen, the Magnum Centre in Irvine and most of Glasgow’s main theatres, including The Arches, The Old Athenaeum, The Pavilion and The Tron. As project co-ordinator for No Mean Fighter, a unique collaboration between students at the RSAMD (now the Royal Conservatoire of Scotland) and inmates of Barlinnie Special Unit, Willy won a Scotsman Fringe First at the Edinburgh Festival in 1992. He hopes to see this play revived as part of the John Maclean Centenary celebrations in 2023.

From 1992-94, Willy worked as a lecturer at the University of London, at Goldsmiths and Queen Mary respectively. He was appointed lecturer at Glasgow in 1994, promoted to Reader in 1998, and to Professor in 1999. In eight years Willy went from drawing income support in Possilpark to Professor of Renaissance Studies at the University of Glasgow. On the downside, his playwriting was shelved as teaching and research, as well as editing and mentoring, took priority. Willy was a Visiting Professor at Dartmouth College in 1997 and in 1998 became the first recipient of the Gerard Manley Hopkins Visiting Professorship at John Carroll University in Cleveland, Ohio.

In 2003, Willy was presented with the Lifting Up the World Award by Sri Chinmoy at a ceremony at Edinburgh University, alongside the poet Tom Leonard. During seasons 2003-4, and 2004-5, Willy was a columnist for The Celtic View, the official magazine of Celtic Football Club which he has supported since childhood.

Willy has also worked off and on in radio, television and film since a stint at the BFI in 1985 when he was credited as Assistant Production Accountant on Derek Jarman’s film Caravaggio. His poem, ‘On My Father’s Refusal to Renew his Subscription to The Beijing Review’, first published in PN Review in 2006, was selected by Alan Spence and the Scottish Poetry Library as one of the Best Scottish Poems of 2007.

Willy won an Innovative Teaching Award at the University of Glasgow Student Awards in 2014. He served on the English panel for the 2014 Research Excellence Framework for Higher Education in the UK, and was awarded a Leverhulme Research Fellowship in 2015-16. 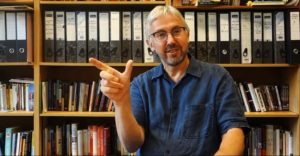