In 2005 I chaired a session of Glasgow’s Book Festival, Aye, Write!, entitled “Franco, Glasgow and Anarchism”. I was interviewing Stuart Christie, author of Granny Made Me An Anarchist. This was a new single volume version of Stuart’s 3-volume memoir, the other two volumes being General Franco Made me a Terrorist and Edward Heath Made me Angry. It was exciting to get the chance to meet Stuart, not just because I was an admirer of his remarkable story but also because both he and my father had something very significant in common: both men had been imprisoned for fighting Franco, thirty years apart. James Maley was captu 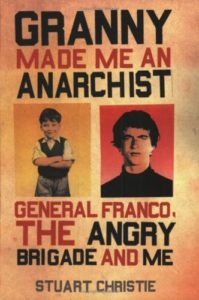 red with comrades of the International Brigade at the Battle of Jarama in 1937 and served time as a POW in Salamanca. Stuart Christie was arrested in Madrid in August 1964, aged eighteen, and charged with being part of a plot to blow up the Spanish dictator at the Santiago Bernabéu Stadium during the final of the Generalissimo’s Cup. The penalty, had it been carried out, was death by garrotte, which involved slow strangulation by an iron collar, topped off by a bolt through the back of the neck.

Stuart recounted that while awaiting trial he was given some dog-eared Agatha Christie (no relation) paperbacks to read. Somebody had a sense of humour. And as I found, he has a great sense of humour himself. Billed in the blurb for this brilliant autobiography as “Britain’s most famous anarchist”, he is also one of Scotland’s funniest and fiercest political commentators. Granny Made Me An Anarchist is infused with the spirit of John Maclean, Matt McGinn, and Billy Connolly, a great Glasgow story that offers a superb overview of twentieth century – especially post-war – Scottish radicalism. It’s an explosive tale full of patter and polemics that offers sharp insights and angles on twentieth-century activism across the generations. And Christie’s fascinating story, like the long struggle it is part of, remains urgent in its relevance today. 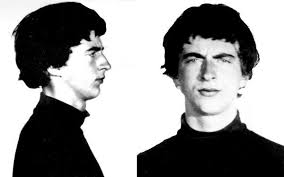 Stuart, as an anarchist, has always been critical of the role of the Communist Party in Spain, and for obvious reasons highly critical too of Stalin and the Soviet Union. He and my father would not have seen eye-to-eye on a few things. But appearances can be deceptive, as can affiliations, including party membership. Stuart and my father both shared an antipathy towards the British state. And neither was sectarian in their political outlook. My father took no prisoners in arguments, but nor did he assume someone was in the right because they talked the talk or wore the right badge. Likewise Stuart is a no-nonsense activist and intellectual who can spot a fraud or a state agent a mile off. And he doesn’t feel the need to include the rank and file of the communist party in his condemnation of Soviet history.

When he reviewed Daniel Gray’s book about the Scottish volunteers for Spain, Homage to Caledonia, in 2009, Stuart demonstrated characteristic generosity of spirit. It would have been easy for him, given his strong anarchist sentiments, to call out the communists as dupes or stooges, as some anti-communist commentators are wont to do. Instead, rather like Orwell at the end of Homage to Catalonia, the book whose title Daniel Gray borrowed, he was able to see the ordinary heroes behind the bigger political frame. Orwell, in a passage critical of the Communist Party, had written “Please note that I am saying nothing against the rank-and-file Communist, least of all against the thousands of Communists who died heroically round Madrid … those were not the men who were directing policy”. Stuart took a similar tack when reflecting on the commitment and sacrifice of men like my father: “The selfless men and women who fought in Spain for the idea of liberty against the reactionary priest-, gun- and prison backed, medieval ideology that was Francoism are the forgotten dead and a now-dying generation to whom we have an obligation of remembrance”. 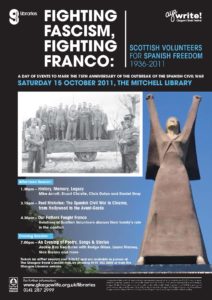 In 2011 I organised a one-day colloquium at the Mitchell Library to mark the 75th anniversary of the outbreak of the Spanish Civil War, an event which drew together relatives of International Brigaders as well as Scottish actors, writers and filmmakers to discuss all aspects of the struggle, from volunteers for liberty to support for refugees. Speakers included award-winning poet and novelist Jackie Kay, as well as Mike Arnott, author of Dundee and the Spanish Civil War, and Chris Dolan, author of An Anarchist’s Story. The event was called “Fighting Fascism, Fighting Franco”. Stuart was the only speaker there that day who had actually fought Franco in his own lifetime.

At the time of the Scottish Independence Referendum in 2014 I found myself on the same page as Stuart. While the Communist Party line was anti-independence, Stuart saw that the breakup of Britain was in the best interests of the working class. That same year, on the 50th anniversary of his arrest, Stuart’s story was featured as part of the BBC World Service series “Witness History” in an episode entitled The Plot to Kill Franco.

In 2016, when I edited a collection of essays on Scotland and the Easter Rising, Stuart contributed a chapter detailing how his own family history was woven into the fabric of that anti-imperialist insurrection. In an echo of his reading of the Spanish Civil War he contrasted ordinary heroism with the politics of complicity and compromise.

More recently, I have had fairly regular contact with Stuart as part of  “Pertyck Cooncil”, an informal gathering of friends with common artistic and political interests. He brings gravitas but also a light heart that has carried him through some tough times. Stuart seems to have inherited his granny’s “apparently unending resources of wisdom common sense, level-headed practicality, energy and ability”. 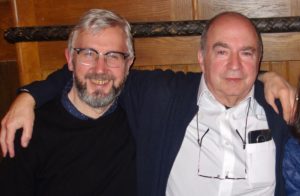 I never had a granny like Stuart’s, a fiery character who inspired him and filled him with a passionate sense of community and a deep loathing of injustice. I suspect my father’s mother, who died when I was ten, could probably have given Stuart’s granny a run for her money. But it’s her son, my father, whose politics helped make me who I am, so I can say “Daddy Made me a Communist”. And in fact I wrote a wee poem after he died, aged 99, in 2007, with that very title borrowed from Stuart’s inspiring memoir:

Daddy Made Me A Communist
(after Stuart Christie)

Not because he was a fully paid-up
Card-carrying member of the CPGB
From the hungry thirties
Till the walls came tumbling down
And yes, beyond the beyond
(He never left the far Left)
A lifelong activist, International Brigader
Ex-POW in Spain, soapbox speaker
From Glasgow Green to Govan Cross
Who had his little helpers posting
Leaflets through letterboxes
On doors scarred by more names
Than a phonebook
Into closemouths dark as cellars
He drove us with cries of:
‘Start at the top landing!’
Dogs dogged our faltering footsteps
Through the tenements of youth
Nor because he had us
Into dialectal materialism when other kids
Were into Daleks and Maltesers
Or took us to the Socialist Fellowship
On Fridays, making us miss Mike Yarwood
Impersonating Wilson and Heath
With a wig and false teeth
Or filled the house with left-wing papers, pamphlets,
Patter, raging at the news, the government, empire, monarchy
Authority in all its shapes and shadows
The walls and bars of social norms
A teetotalitarian intoxicated by ideology
High on the craic of his Irish father
Stuck in that wild red neck of the woods
That we called home, bereft of hope
But thinking back, that was solidarity
That handclasp for a broken stranger
Hunched in a doorway
The way his father hunched on his arrival
A hundred years or more before
Despairing, defiant, clutching his collar
Yet I remember him walking
Himself one of nine, later sole survivor
Father of nine, father of mine, provider
Not sole, but solitary, pacing
In solitude through streets paved with gum
Carrying The Morning Star
In a hand that would move hot coals around
The fireplace like chess pieces while we pleaded
‘Use the poker, Daddy!’
Stepping, striding, whistling
Bunnet pushed back, eyes aglitter
As the evening star stared down
On dead-end lives of misery and mess
And I wish I had been, not son
Or seventh child, as was
But comrade, friend, supporter
Of a living cause.